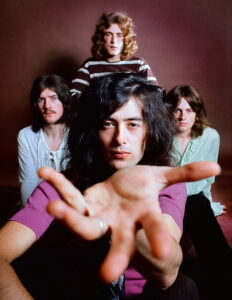 The ZOSO Masterpiece album (Led Zeppelin IV) by Led Zeppelin remained on the charts for over 250 weeks in 1971 and went platinum a dozen times over! This set a record for chart longevity and became the fifth biggest selling album in music history! Unlike their first three albums, Page and Plant wrote most of the songs for Led Zeppelin IV before entering the studio. The band decided to use the studio Headley Grange where they had previously recorded much of the music for Led Zeppelin III. They liked Headley’s comfortable environment (although Jones thought it was cold and damp) and added the Rolling Stones mobile unit to assist in the recording. The band rehearsed for a full week and worked on future tunes “Down by the Seaside” and “No Quarter.”

Big Quote: “We decided that on the fourth album, we would deliberately play down the group name, there wouldn’t be any information on the outer jacket. Names, titles, and things like that do not mean a thing.” – Jimmy Page 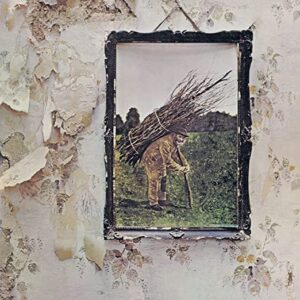 The final tracks for Led Zeppelin IV were “Black Dog,” “Rock and Roll,” “The Battle of Evermore,” “Stairway to Heaven,” “Misty Mountain Hop,” “Four Sticks,” “Going to California,” and “When the Levee Breaks.” The first tune for the new album came from a John Paul Jones riff that he had scratched out on the back of a train ticket using a number based system his father had taught him. Page then wanted to build a structure on it that would use call and response phrasing between Plant’s lyrics and the full band. The riff was based on Jones’ riff in 3/16 time and was difficult to hear and play. It evolved into alternating bars of 4/4 to 5/8 to 4/4 to 5/4 meters. When they finally got it down, the whole band was overjoyed with the result. It was still difficult to play, especially with Plant’s a cappella vocal calls that are followed by the band’s responses, and the constant starts and stops. At one point a black labrador retriever was hanging around the studio so they named the song “Black Dog.”

The song “Rock and Roll” (first called “Been a Long Time”) was conceived when Bonham was messing around with the opening drumset beat to Little Richard’s song “Keep A Knockin” played by drummer Charles Connor. Bonham took Connor’s swing eighth note feel and “straightened it out” adding a very hard rocking flavor. Page was inspired by Bonham’s drum intro and groove and Page added a riff in the moment. Page stated “I started doing pretty much half the riff you hear on “Rock and Roll” and it was so exciting that we said ‘let’s just work on this.” For “The Battle of Evermore,” Page picked up a mandolin that Jones had just lying around. Page’s experimenting with the mandolin sounded like an old English instrumental styled song. For the lyrics, Plant had been reading a book about very old Scottish border wars and drew its very graphic battle scenes. He also added from the imagery from Lord of the Rings. Page brought in vocalist Sandy Denny from the band Fairport Convention to add a question and answer type phrasing to Plant’s vocal lines. She would be the only guest vocalist to ever appear on a Zeppelin album.

Big Quote: (on writing “Stairway”) “Both Jimmy and I were quite aware of the way a track should unfold and the various levels it would go through…we were both influenced by classical music and there’s a lot of drama in the classical forms.” – John Paul Jones

Page was very motivated to work on a concept song that in his mind was still in very unrelated sections. One night at Headley Grange, Page and Jones were sitting around a fireplace. Page played a few things he had worked out on his guitar and Jones added a bass recorder part. Next, Jones worked out some transitions between the sections by adding some parts on electric piano. The simple guitar-recorder duet was in place to set the mood of the song and now it was Plant’s turn to work alone with Page. Plant had been reading The Magic Arts in Celtic Britain by Lewis Spence and when Jimmy played his very tranquil opening “Stairway” chords, Plant immediately began to write the words “There’s a lady who’s sure all that glitters is gold and she’s buying a stairway to heaven…” Plant gave an interpretation of the “Stairway” lyrics when he said “The lyrics were a cynical thing about a woman getting everything she wanted all the time without giving anything back.”The next day, the full band was running through the song and Plant finished the lyrics on the spot. The parts of “Stairway” progressed where the electric guitar didn’t enter until the three minute mark and the drums enter a minute and a half later, building intensity along the way. A third section begins with sharp guitar strumming and Zeppelin explodes with the hard rocking instrumental section. The song ends with an a cappella Plant vocal line. Jones felt that the arrangement was organic and that “somebody would start something and somebody would follow and it would turn into something else. Yo would sit down and wok out what sections you’ve got and put then together.” All of the members of Zeppelin knew instantly that they had a masterpiece!

Big Quote: “Every musician wants to do something of lasting quality, something which will hold up for a long time, and I guess we did it with Stairway” – Jimmy Page

“Stairway to Heaven” has been the subject of controversy since Page was accused of stealing the melody from a tune by the band Spirit (The dispute was resolved in court and Page was found not guilty). “Stairway to Heaven,” as a composition, showed how the band could bridge an acoustic, folkloric direction with a hard rocking second section. The band knew this tune would help to define their legacy. Jimmy Page said, “I thought ‘Stairway’ crystallized the essence of the band…. It was a milestone for us.” Page was also accused of adding Satanic codes to “Stairway to Heaven” with some focused on his reputed obsession with the occult.

John Paul Jones developed the main riff for “Misty Mountain Hop” on an electric piano. The lyrical inspiration for “Misty Mountain Hop” came from a public rally in London to legalize pot. Plant’s lyrics referenced visions of a more free society and the narrator in the song decided he was going to the Misty Mountains “over the hills where the spirits fly.” The song “Four Sticks” was finalized after Bonham attended a show by drummer Ginger Baker’s band Airforce. Previously, Zeppelin had worked unsuccessfully on the song but now Bonham (being very competitive) was inspired to “play better than” Ginger Baker. Bonham picked up four sticks (two in each hand) and they did the song in only one take. For “Going to California,” both Page and Plant were inspired by the great Joni Mitchell and especially her album Blue. Plant created lyrical lines about Southern California and his own desire to meet Mitchell. Page was fascinated with Mitchell’s guitar approach and ability to compose beautiful ballads.

“When the Levee Breaks” was inspired by a 1929 country blues song by Memphis Minnie and Joe McCoy that Plant remembered from an old album in his collection. The band had previously recorded it at Island Studios but was unhappy with the outcome. Working with a new Ludwig drumset that arrived at the studio, engineer Andy Johns and Bonham set up the new kit in an entranceway with a high, open cathedral ceiling. With two overhead ambient mics positioned in the staircase, ten feet over the drums, they recorded Bonham’s part. It was a massive sound, like none other on a Zeppelin recording. Upon hearing this huge sound, Jones added a very solid bass part and Page added a powerful guitar part on his Fender twelve-string guitar with an open G tuning.

It was Jimmy Page’s idea that each group member would design his own symbol (to represent themselves) for Led Zeppelin IV. Plant said that his sign of a feather in a circle represented peace, truth, and courage. Jones’ design of a circle with three intersecting almond shapes would stand for competence and self-confidence. Bonham’s came from a tarot card with interlocking circles representing a unified trinity (but some have pointed out that is was the logo for Ballantine Ale – one of Bonham’s favorite beers). Page would not explain the meaning of his ZOSO symbol. Some have speculated that it came from Aleister Crowley satanic obsessions or a representation of the planet Saturn. Page stated “my symbol was about invoking and being invocative, and that’s all I’m going to say about it.”

In the end, “Stairway to Heaven” and the total effect of The ZOSO Masterpiece album known as Led Zeppelin IV helped to solidify the genre of “classic rock” and the classic rock radio format. Even the critics were positive about this album!

The album Led Zeppelin IV, was indeed a masterpiece, and not just because of “Stairway.” At this point in their career, Led Zeppelin was collaborated with each other “on a new level” in terms of songwriting, interplay in the studio, adding new instrumental sounds (Page’s guitars and Jones’ array of instruments), and an evolving sense of how to record and utilize the studio setting. On Houses of the Holy, songs such as “The Rain Song,” “The Crunge,” and “The Ocean” were a departure for Led Zeppelin and led them into new musical territory. Even though on their first three albums Zeppelin integrated blues, folk, and hard rocking styles; now they branched out with styles such as reggae, funk, progressive rock, and more jazz influences. They were also musically adventurous in their approach to odd time meters such as 9/8, 15/8 and 5/4. On songs like “Black Dog” they were pioneers with mixed meter phrasing by playing meters that alternated from 4/4 to various odd meters.

For the next three years Led Zeppelin was in its prime. At this point many other hard rock and metal bands had emerged, but Zeppelin had set the standard with their musicianship, sense of mystique, and worldwide popularity!