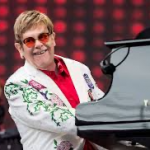 Elton John was the biggest pop-rock star of the 1970’s (he could make a claim as“king of pop” at least for that decade).  His flamboyant stage attire and outspoken persona only added to his star status. In a remarkable career that kept him on the charts for over twenty-five years, Elton John adeptly changed with the times.  Elton’s musical relationship with Bernie Taupin has rivaled the legendary partnerships of Lennon and McCartney and Tin Pan Alley’s Rogers and Hart.  Elton John crafted Beatlesque catchy pop and rocking songs that infused soul, disco, pop ballads, and country styles.  His great versatility, combined with uncanny melodic skill, puts him in a classic rock league of his own.

Elton John (born 1947- ) was born Reginald Kenneth Dwight in 1947 in Middlesex, England.  He would go on to become the biggest-selling rock-pop artist of the 1970’s and sell more albums on each side of the Atlantic than any other British male artist. Elvis and Frank Sinatra are the only solo male artists that bettered Elton John’s transatlantic chart success.  In 1973 and 1974, John recorded four consecutive number one albums in England and America.
Dwight began playing the piano at age four and won a scholarship to the Royal Academy of Music at age eleven.  After six years of study, he formed the group The Corvettes and then joined the band Bluesology.  By 1965, Bluesology became the backup band for touring American R&B musicians such as Patti LaBelle and The Isley Brothers. A year later, Bluesology came to the attention of the artist Long John Baldry and became his supporting band.  At this time, Dwight tried out for two of the biggest progressive rock bands, Gentle Giant and King Crimson.  He failed both auditions to become their lead vocalist.  He also failed an audition with Liberty Records, however they gave him some lyric sheets left to them by a writer named Bernie Taupin. Dwight began to match music to Taupin’s lyrics and corresponded with him through the mail.  They met six months later, only now Dwight went by his new stage name, Elton John.  He derived the name by combining the first names of Bluesology saxophonist Elton Dean with John Baldry.  Elton John remembered, “Some guy at Liberty told me to go to Dick James Music and do some demos.  I was receiving Bernie’s lyrics and writing the songs and doing demos before I even met Bernie.  One day I was doing a session and noticed him in the corner.  I said, ‘Oh are you the lyrics writer, and he said yeah, and we went around the corner for a cup of coffee and that was it, really’.”
John and Taupin became house songwriters for DJM Records in 1968. They wrote at lightening speed, Taupin writing often at the clip of a song per hour and Elton matching his lyrics at the same rate.  Bernie Taupin reflected on the special approach that he and Elton shared.  Taupin said, “You can write one or two ‘classics,’ that will last and be covered again in a few years time, but I think a majority of good pop songs nowadays are disposable…I think that’s healthy in a way.  You should always have fresh material coming along…The reason we’ve (Taupin and Elton) survived and will continue to survive for a good long time is because we’ve got the upper hand on everybody else and can turn our ideas into anything, any sort of music.  We can do things like just playing rock & roll, country material, blues…I mean, we’ve done every type of music.”  This prolific duo continued to develop their chemistry by writing songs for pop singers Lulu and Roger Cook. Additionally, John recorded cover versions of current hits on the side.

The decade of the 1970’s saw Elton record eleven studio albums. 1970’s Tumbleweed Connection made the top ten in America with heavy FM radio airplay. 1971’s Madman Across the Water built his fan base but 1972’s Honky Chateau became the first of seven consecutive number one albums with the mega hits “Honky Cat” and “Rocket Man.”  This brought Elton to superstardom. Next followed 1973’s Don’t Shoot Me I’m Only the Piano Player. The John/Taupin hit machine was unstoppable with sixteen top twenty hits in a row!  This included “Crocodile Rock,” “Daniel,” “The Bitch is Back,” “Philadelphia Freedom,” and “Saturday Night’s Alright for Fighting.”     1973’s Goodbye Yellow Brick Road shot straight to the top of the charts in Britain and America. It temporarily identified Elton as a glam rock star with his elaborate costumes and flamboyant stage personality.  Goodbye Yellow Brick Road sold over thirty million copies worldwide.  It also featured at least five hits including the title track and “Bennie and the Jets,” the latter going to number one on the charts. 1974’s Caribou and Greatest Hits, 1975’s Captain Fantastic and the Brown Dirt Cowboy and Rock of the Westies all went platinum.  Elton John next founded his own record label, Rocket (distributed by MCA), that enabled him to sign Kiki Dee and Neil Sedaka. Elton remained with MCA for a record-breaking eight million dollar contract in 1974.

That same year, Elton appeared on John Lennon’s comeback single “Whatever Gets You Through the Night.” In 1976, Elton John revealed that he was bisexual, which unfortunately affected his popularity to a certain extent.  Also at this time, Pete Townshend of The Who asked John to play a character called the “Local Lad” and perform the song “Pinball Wizard” in the film of the rock opera Tommy.  After 1976, Elton cut his performance schedule due to exhaustion and retired from live performing in 1977.  John’s relationship with Taupin became strained following the release of 1976’s double album Blue Moves.  1978’s A Single Man yielded no top twenty hits but John did return to live performing. 1979’s Victim of Love did not fare well but did produce the hit“Mama Can’t Buy You Love.”
The 1980’s were a productive period when Elton John recorded nine studio albums.  Elton reunited with Bernie Taupin for 1980’s 21 at 33, featuring the hit “Little Jeannie.” He followed with 1981’s The Fox and 1982’s Jump Up!. 1983’s Too Low for Zero yielded two hits, “I’m Still Standing” and “I Guess That’s Why They Call It the Blues.”  These songs began another streak of hit singles.  The rest of the decade saw Elton John release 1984’s Breaking Hearts, 1985’s Ice on Fire, 1986’s Leather Jackets, 1988’s Reg Strikes Back, and 1989’s Sleeping with the Past.
Elton John went on to record eight more studio albums, from 1992’s The One to 2016’s Wonderful Crazy Night.  However, the late 1980’s and early 1990’s were a difficult time for Elton John.  He struggled with personal and health issues.  By 1991, he was again healthy and founded the Elton John AIDS Foundation.  John announced that he would donate his royalties from his single sales to AIDS research. To date, he has raised over $200 million dollars to fight the disease.  In 1997, Elton re-wrote and performed the tribute hit “Candle in the Wind” (originally written in honor of Marilyn Monroe) in the memory of Princess Diana, his close friend.  Elton John was active in the 2010’s including the release of 2017’s Diamonds, a compilation that marked the fiftieth anniversary of his songwriting partnership with Bernie Taupin.
2018 found Elton John announcing the beginning of a lengthy farewell tour that is inspired by his desire to spend more time with his children.  He has stated that he will continue to compose and record, and hasn’t ruled out occasional live appearances, but he has said that his touring days are over.
Elton John was inducted into the Rock and Roll Hall of Fame in 1994.